The EU’s stance on Stablecoins: What’s The Latest?

The EU’s stance on Stablecoins: What’s The Latest? 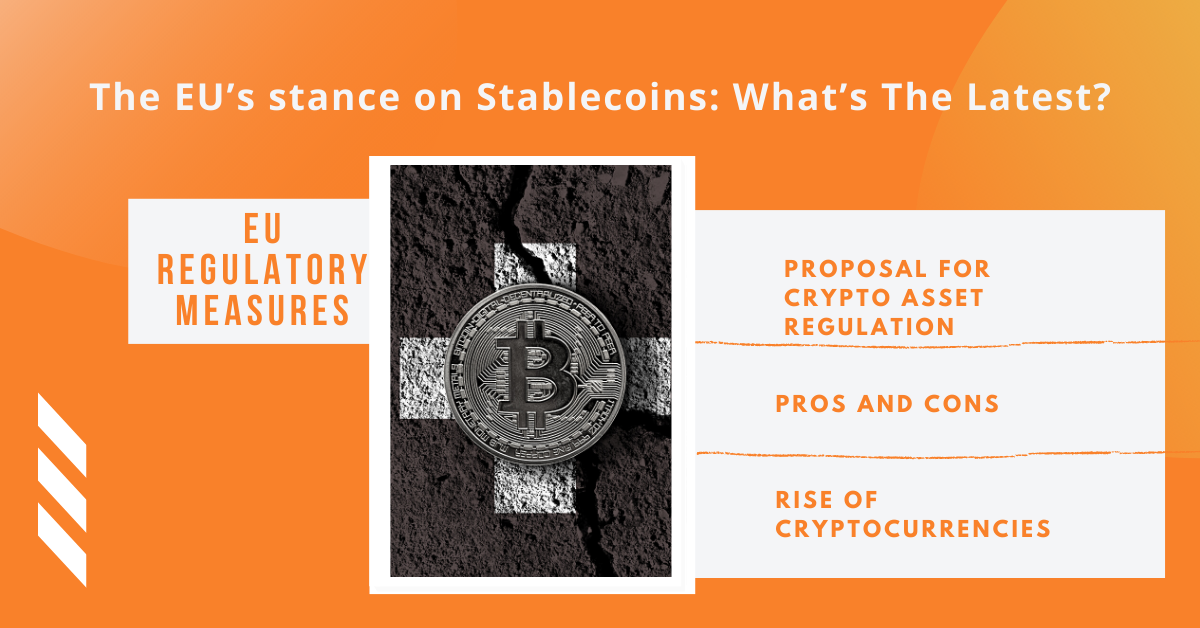 Thanks to advances in digital technology applications, the payment sector has seen the emergence of cryptocurrencies and their exponential growth in a little over a decade. However, cryptocurrencies have not been widely accepted due to various causes, including their high volatility.

The government and the commercial sector have worked to address the issue of volatility. Stablecoins, or cryptocurrencies that attempt to produce an enduring value relative to a particular item or group of assets were the private sector's response. Stablecoins may do this in three ways at the moment: Algorithms, legal aids, and crypto-assets.1

Stablecoins are cryptocurrencies with a fixed supply, never being created or destroyed. If you buy one, it doesn't get smaller, and it will always be the same amount. Stablecoins have become popular because of their stability. It's also become a popular investment option for those who want to hedge their investments. It's easy to transfer funds between stable coins. They are also easy to trade.

These may improve financial inclusion in both developed and emerging countries and stimulate international payments and remittances in particular. However, possible economic concerns arise from the legal classification of stablecoins, governance issues, or the coins' operational robustness.

National governments in developed economies are considering two complementary measures to address these issues: establishing central bank digital currency ('public stablecoins) and regulating stablecoin use. The European Commission proposal for a regulation for crypto-asset markets, adopted in September 2020 and presently under assessment by the co-legislators – the European Parliament and the Council – is the centerpiece in the EU.2

The EU Commission submitted a proposal for crypto asset regulation on September 24, 2020, titled "Markets in Crypto-Assets Regulation" (MiCA). The MiCA will be directly applicable legislation in all EU member states once it is ratified and in force, and it will govern all issuers and service providers engaging with crypto-assets.

The MiCA has the ability to define worldwide rules for the governance and regulation of digital, blockchain-based assets, as well as the strong desire to do so. The EU could attract crypto talent, firms, and investments from all over the globe by enacting clear standards and long-term legal stability.

The EU has recently announced its plan for creating a stablecoin. The Euro will back the Stablecoin, and it will be issued in partnership with the Bank for International Settlements3. This stablecoin is called a Basel-Clearing Account. The European Central Bank and the BIS (Bank for International Settlements) work together to create a new crypto-backed currency. The central bank will issue the euro to banks in return for shares. The goal is to create a digital version of cash that is fully transparent, reliable, and secure.

In Switzerland case, The Swiss National Bank (SNB) has advised that cryptocurrencies with fixed exchange rates might compromise the bank's capacity to maintain price stability5.

The central bank's position on digital currencies was articulated by Thomas Jordan on September 5, 2019.  Stablecoins, which maintain reserves of francs, dollars, and other currencies in proportion to the number of tokens released, are considerably more likely to flourish as a form of payment competition, he claims. Jordan found no difficulty with Swiss franc-backed stablecoins functioning within the country. He also suggested that the SNB consider releasing a digital version of the Swiss franc, but solely to banks and other financial institutions rather than the general public. For its ongoing attempt to construct a new platform for digital assets, the Swiss stock exchange has requested the SNB to create such a stablecoin6.

This approach has a number of pros, to name a few are for example:

Traditional banks, on the other hand, do not always succeed in achieving that goal. A well-functioning financial system is lacking in many developing nations. As a result, ease of access combined with stability may help to improve financial inclusion.

Considering that many experts think that remittances and economic growth go hand in hand, the adoption of stablecoins and comparable technologies might help underdeveloped nations grow faster.

On the other hand, there are some cons like:

Stablecoin provisions may include elements like as payment systems, bank deposits, and so on, depending on their design and claim structure. In the case of the EU, special issues (law applied and conflict resolution) may arise in a cross-jurisdictional environment.

If the essential measures are not put prior to the introduction of a stablecoin, there is a possibility that the investment policy will be utilized to privatize asset gains, while asset losses would be passed on to coin holders.