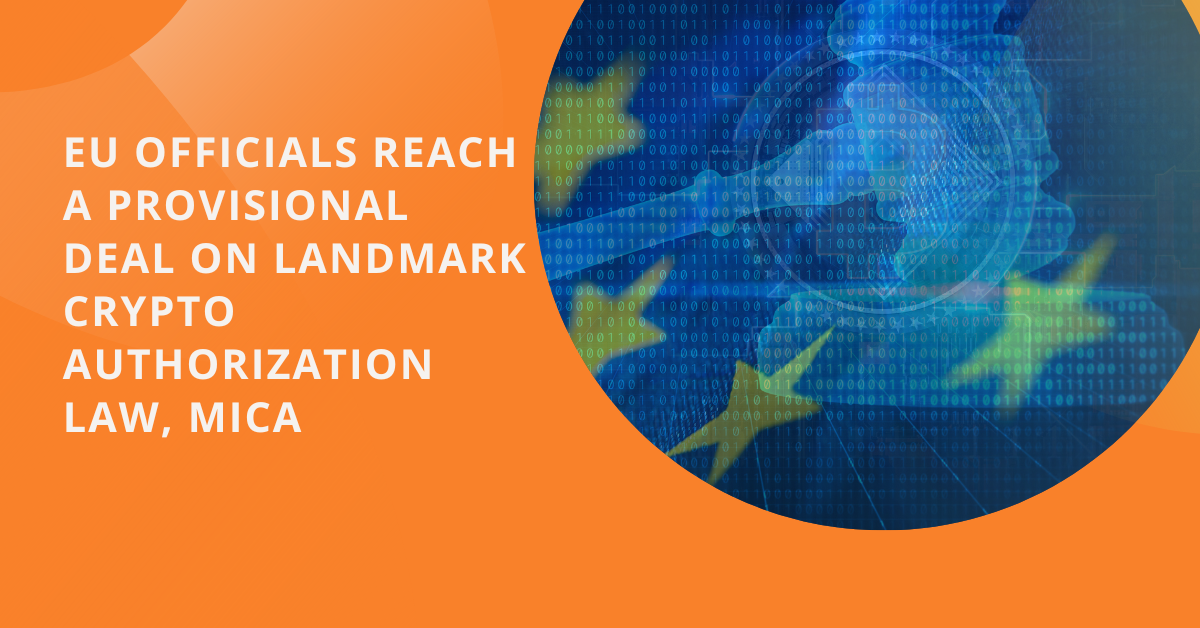 On Thursday, June 30, 2022, EU officials hammered out an agreement that is the first regulatory law passed for the cryptocurrency industry.

The agreement was announced via a tweet from Stefan Berger, the lawmaker in charge of guiding MiCA through the complex legislative procedure of the EU. Mairead McGuiness of the European Commission commended the news as she left the nearly seven-hour-long meetings.

In response to the volatility experienced in recent weeks in the cryptocurrency markets, McGuinness told CoinDesk, "I think everybody's now aware that you can't have an unregulated sector."

She stated, "We do think there needs to be international cooperation because it's crucial that we don't regulate on our own. We're delighted that we're leading on this.

McGuinness has already urged collaboration among American governments on crypto legislation, and recent indications point to the Biden administration's consideration of enacting its own stablecoin regulations.

McGuinness also stated that this is not the end of the narrative, following the European Central Bank's Christine Lagarde's statement that new legislation, such as crypto lending, would be required.

"No legislation is ever set in stone, and no crypto legislation could be," McGuinness added. "Those in this field who are thinking of becoming inventive will now do it inside our regulations rather than in the Wild West."

One source familiar with the negotiations told us that the final agreement would completely exempt non-fungible tokens (NFT) from the reach of the law unless those NFTs can be divided up or fractionalized, meaning that many persons can hold portions of an NFT.

As per a tweet from lawmaker Ernest Urtasun, the agreement would impose a daily transaction limit of 200 million euros on huge stablecoins that become popular payment options.

On September 24, 2020, the European Commission released the MiCA proposal. It is part of a bigger digital finance package aimed at developing a European approach that promotes technological advancement while ensuring financial stability and consumer protection.

Aside from the MiCA proposal, the package includes a digital finance strategy, a Digital Operational Resilience Act (DORA) - which will also include CASPs - and a proposal for a distributed ledger technology (DLT) trial regime for wholesale usage.

MiCA has gained extensive industry support since it can improve legitimacy, encourage adoption by traditional banks, and give cryptocurrency startups a single license to operate throughout the bloc.

Many people, however, grew more concerned about further legislative attempts to broaden the law's application to cover decentralized finance (Defi) and NFTs as well as reduce the environmental impact of the proof-of-work consensus method that powers bitcoin.

The question of whether NEFT service providers, which include markets like OpenSea, should be required to obtain regulatory authorization to operate within the bloc, was the main topic of discussion in the most recent round of negotiations.

The stablecoin laws were first developed in response to libra, the cryptocurrency proposed by the former Facebook CEO, which finance ministers feared would usurp the role of governments in governing money.

Though libra (later renamed Diem) is no longer in existence, the idea of rigorous controls for stablecoin issuers has gained traction in the aftermath of terraUSD's spectacular collapse last month.

The legislative agreement comes as US authorities contemplate their restrictions, notably for the stablecoin industry. It also comes on the heels of the EU's controversial anti-money laundering legislation imposed on crypto service providers on Wednesday.

Crypto firms will still have a transition period during which they can follow the new laws until the political agreement is formally adopted and the legislation is gazetted in the EU Official Journal.