The European Commission is urging Google to be more transparent 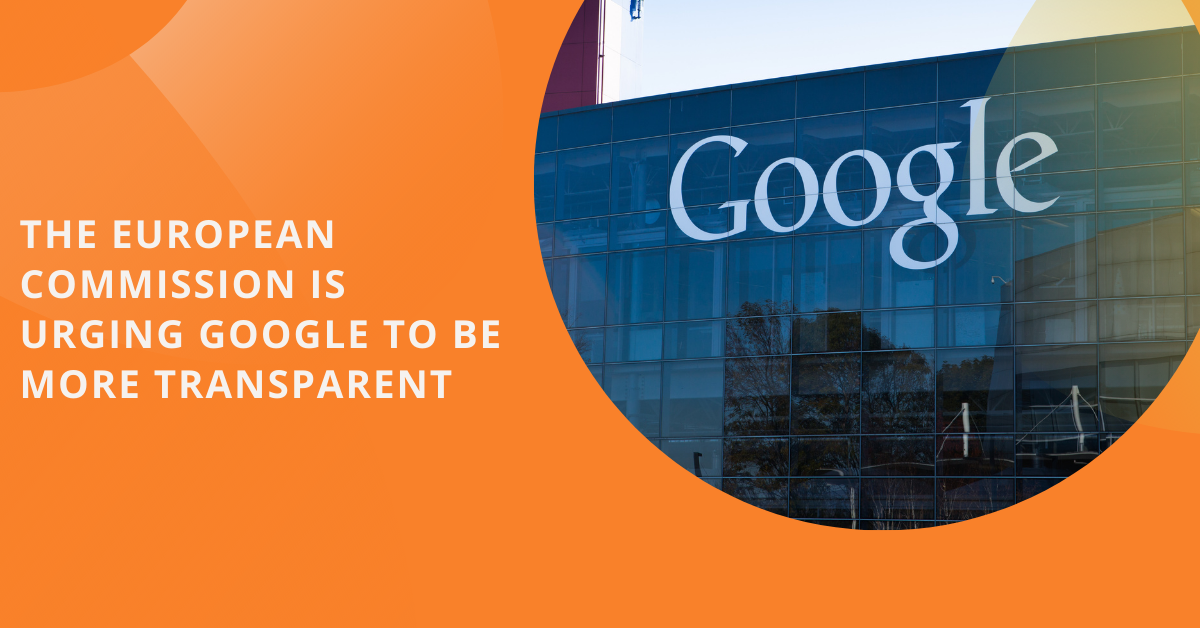 Google offers numerous services, now that the EU intends to regulate digital firms more strictly than previously with a new set of laws (the Digital Services Act) the company is at risk. This is founded on the understanding that the Commission may not only demand but also enforce transparency. This should involve making suggestions on such businesses' platforms visible to users, explicitly labeling advertising, and swiftly penalizing and deleting rule breaches in user-generated material.

In response to customer searches, the Google search engine is increasingly delivering direct commercial offers, particularly for hotels and flights. Under the leadership of the Netherlands Authority for Consumers and Markets and the Belgian Directorate-General for Economic Inspection, the Commission and Consumer Protection Cooperation authorities have asked Google to make it clear when it acts as a direct seller or intermediary, as well as to improve its overall compliance with EU law for its various services.

The European Commission and state consumer protection agencies are pressuring Google to make its search engine more transparent. As the commission said on Monday, the aim is, among other things, ensuring that consumers understand how the order of search results is determined and if money plays a role. Google has two months to notify any modifications to its practices to the Commission. One more time, Google is in legal trouble.

Another requirement is that if the search engine displays airline or hotel rates, they must already include any additional fees or taxes that have been computed (for avoiding misleading advertising). Google must also make certain that the hotel reviews displayed are accurate. Many people say that’s an amazing idea as many times people write reviews even if they haven’t visited the place.

The hotel and flight search business models should be explained to the users in a way that all people can understand.

Consumers in the EU should not be misled while using search engines to plan their holidays, according to Justice Commissioner Didier Reynders. They would need access to transparent and fair information to do so.

Furthermore, if consumer protection authorities detect violations of protective measures, Google should delete or disable this information more immediately. Users of the Google Store presently do not have sufficient rights, according to the Commission and consumer protection authorities, because the terms of service allow the company to cancel purchases and fix pricing mistakes unilaterally.

Also, authorities from the CPC have found other numerous issues on Google services. We enlist them for you:

Google is now working on complying with the authority requirements.

Some of them according to some digital security experts can be dangerous for EU citizens. The EU is an example to follow regarding digital law.

With the help of the EU Commission, national consumer protection agencies should examine Google's reaction and any modifications that have been published after the two-month timeframe. There should be more discussion if the group's pledges are deemed insufficient. "In the end, national authorities have the power to impose punishment," the commission stated.

In response to the demands, a Google representative expressed, "We welcome the conversation and work closely with the consumer protection agencies and the European Commission." The goal is to work together to figure out how to make changes for users and how to convey them more transparently.

Google does not want to have legal disputes and if having them, they search for the best way to be on good terms with the authority. A very large legal dispute can affect Google in a very wide way.

If Google's pledges are considered by the EU Commission as insufficient, a follow-up conversation will be held. Sanctions may be imposed by national authorities in the end.

Something worth mentioning: The Digital Services Act is not only against Google, it’ll apply to all companies. That’s why apps such as TikTok, Instagram, among others are worried about.

Not only, their in-house lawyers are working on a strategy just in case, but also they have to analyze deeply that new Act. It’s not just about interpretation.

TikTok is even more worried because a few days ago has entered into a formal conversation with the European Commission and the CPC authorities to evaluate its business practices and regulations. This comes after the European Consumer Organisation (BEUC) raised concerns about TikTok's violations of EU consumer rights earlier this year. Hidden marketing, aggressive advertising methods geared towards minors, and some contractual provisions in TikTok's rules that might be deemed deceptive and confusing for customers are all areas of particular concern.

TikTok may be next.